In The News Detail

Jan 9, 2020
Click here. B&R, a unit of ABB’s Robotics and Discrete Automation business, announced the integration of ABB robots into its automation portfolio. With the ability to offer unprecedented levels of machine flexibility and precision, merging robotics with machine control into one unified architecture will enable manufacturers to embrace the trend of mass customization and optimize their lot size one processes.
Category: Sales Blog/News
Posted by: editor
Fully integrating ABB’s robots into its automation systems means that B&R will now be able to supply machine builders with machine automation and robotics from a single source. Machine builders will be able to buy their robots from B&R along with all their control, I/O and drive components.

“The integration of ABB’s robot fleet into the B&R portfolio makes us a true one-stop-shop. We are the only company to offer industrial automation customers the entire range of integrated hardware and software solutions around control, actuation, robotics, sensing and analytics and electrification. Our strength lies in our ability to combine ABB and B&R products into one solution, supported by our deep application expertise. This will help manufacturers increase their flexibility, at all levels including machines, to support shorter product cycles and to make much smaller lots of greater variety,” said Sami Atiya, President of ABB’s Robotics and Discrete Automation business.

Machine builders will be able to choose from a wide range of ABB robots, including articulated arm, SCARA, delta and palletizer robots in various sizes and with various payloads. This is particularly important for machine applications where a high degree of synchronization with other components is required, for example with picking solutions. With ABB robots integrated into the machine automation system, customers will benefit from an unprecedented level of synchronization between robotics and machine control. Since the robot will no longer require a dedicated controller, all interfaces between the machine and the robot are eliminated, while the fact that all axes and sensors will now communicate on a common network increases precision to the previously unimaginable microsecond range.

Integrating robotics and automation also means only one controller and one engineering system will be needed for development, diagnostics and maintenance, so there will no longer be a need for an extra control cabinet just for the robot, which will save floor space.

“Our newly developed integrated solution enables us to support machine builders, enhancing their processes and future-proofing their automation investments. Traditionally, the robot is a self-contained system, with its own controller and its own control cabinet. Engineering, diagnostics and maintenance are all performed using dedicated systems, and with specific robotics language, you often need a specialist programmer,” said Hans Wimmer, Managing Director of B&R. “With the incorporation of ABB robots into one simple architecture we create a fully integrated automation system. For machine developers, it now makes no difference whether they must integrate a single motion control axis or an entire robot into the machine.”

Synchronization between sensors and robot motion will also become easier with integration. For example the result of a quality inspection with a B&R vision camera can be converted into a control command for the ABB robot in less than a millisecond, so defective workpieces can be removed from the production process without manual intervention or slowing the manufacturing process.

Since the machine builder no longer needs to use separate hardware, communication networks and applications, he is able to achieve much tighter synchronization between the robot and other machine components. The movements of the robot and all of the machine's motion control axes can be coordinated with unprecedented microsecond precision, boosting the productivity of the machine and the output of the process.

The robots are programmed in B&R's universal engineering environment just like all other automation components, while in the digital twin the user can simulate and optimize the machine's entire motion sequence, including the robotics, before the machine is built. This makes engineering and development both faster and cheaper, which in turn lowers the threshold for machine builders looking to implement robotics in their production machinery and increases their return on investment. 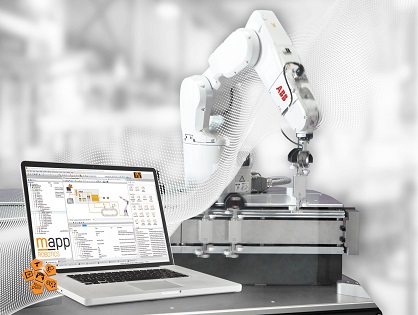